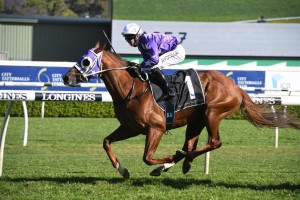 A rails hugging, paint scraping ride from Brenton Avdulla got the right result when Kubrick bounced back to win the first running of the $1m Bondi Stakes (1600m) at Randwick today. Kubrick, above, wins the inaugural running of the Bondi Stakes at Randwick. Photo by Steve Hart.

Avdulla forced Kubrick through an opening that wasn’t there between the leader Colada and the inside running rail but persevered until the run opened up.

Head on vision shows that the plastic running rail buckled on several occasions as Kubrick squeezed through the narrowest of openings.

“It is amazing what good horses can do. I was happy that he was going to get a great run. I thought Timmy’s horse had to back up from the Spring Champion. I thought I could get stuck. Then Bossy came around to keep us tight,” Avdulla said.

“My foot is on fire from the paint. He won like a top class colt. It is always nice to ride a winner but with a million dollars next to it it is even better.”

Once Avdulla had forced Kubrick through the gap, the Chris Waller trained colt stretched out to record a one length win over his stablemate Pancho ($21) with the leader Colada ($8) battling on to claim third prize.

Kubrick had no luck from a wide barrier last start when fourteenth to Super Seth in the Group 1 $2m Ladbrokes Caulfield Guineas (1600m) at Caulfield a fortnight but the punters stuck with the Waller trained colt and sent him out as the $3.70 equal favourite.

“We didn’t have the most amount of luck and at the 300m when there was half a gap we were lucky to have a tough colt like him who relished the challenge and bustled his way through and showed a nice clean pair of heels. Everyone can forgive him now for a tough run from an awkward alley in the Caulfield Guineas.”

The Gai Waterhouse and Adrian Bott trained Just Thinkin’ was the other equal favourite and after travelling in the box seat behind the leader, failed to go on with it in the straight and wound up in fifth spot.