Talented filly Dame Giselle is heading on the right path towards the Flight Stakes with a dominant win in the Group 2 $200,000 Darley Furious Stakes (1200m) at Randwick today. 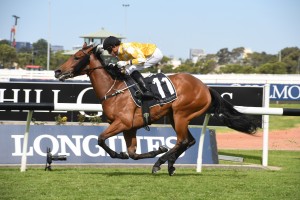 Dame Giselle, above, was the winner of the Furious Stakes at Randwick. Photo by Steve Hart.

The Peter and Paul Snowden trained Dame Giselle had to overcome a wide trip but was still too strong to the line to beat the Chris Waller trained Hungry Heart ($4.40) with Forbidden Love ($10) claiming third spot.

Dame Giselle jumped from a wide gate and Tommy Berry had no luck in the early stages and had to be content to sit three wide on the $3.80 favourite for the entire trip.

Berry nursed Dame Giselle over the rise but once he released the brakes, the  filly found another gear and went to the line strongly to record a half a length win over Hungry Heart.

“She didn’t have any luck at all at any stage but Tommy might have had second thoughts of going back too far. But I’m glad didn’t because she has just shown her tenacity today, she has done it twice now three deep no cover and got away with the victory so she is a special filly,” co-trainer Paul Snowden said.

“That was the chance we took, obviously drawing nine it was a sticky gate. We still needed a little bit to go our way in the first 2/300m which we obviously never got but to her credit she has really found late.”

“The main aim has always been to excel at 1400m with a little bit more of a sit in her races, mid-race and she still has that devastating turn of foot which we’ve seen again off a wide run.”