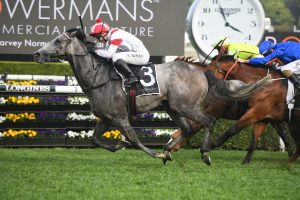 Classique Legend, above, was a brilliant winner of The Shorts at Randwick. Photo by Steve Hart.

Classique Legend was marked at $10 for the $15m The Everest (1200m) at Randwick on October 17 before today’s win but is now the second favourite at $5 at Ladbrokes.com.au.

Winning jockey Kerrin McEvoy settled Classique Legend in the second half of the field in the early and middle stages, and didn’t panic when the grey was pushed back to near last coming down the rise.

McEvoy eased Classique Legend ($4.40 favourite) to the middle of the track for clear running and the Les Bridge trained gelding powered home to record a sensational win in The Shorts.

“I just had to bide my time and full credit to the horse, once I got clear air he powered that last furlong. I’ve been lucky enough to ride Redzel and some other great sprinters in my career and you’d have to say he’s right up there with those,” McEvoy said.

“Just got a great disposition, mentally he’s a joy to be around, he switches on for game day and that’s what he showed there, he just went into beast mode when I need him to. Les and Carmel hatched a plan to keep him in after that mid-Winter run and I think it’s just been a blessing.”

Runner up Eduardo ($11) ran a brave race to get within one length of the winner with the unlucky Bivouac ($5) a close-up third.

Classique Legend is already locked into a spot for The Everest and will run in the slot owned by Bon Ho.

Trainer Les Bridge wasn’t surprised to see Classique Legend storm home down the middle of the track and rates the grey the best horse he has trained, even better than than his champion sprinter Sir Dapper.

“He’s the best horse I’ve ever trained. Couldn’t do much better than that could he? Some have got four cylinder motors, he’s got a V8. I honestly thought he was a bit underdone today.”

The post Classique Legend firms in betting for The Everest after win in The Shorts appeared first on HorseRacing.com.au.