In what was a step up in class for the three-year-old, Standout made up ground on the Snowden favourite over the final furlong to keep his outstanding unbeaten record intact.

Standout, who had won previously won at Gosford and Kensington, was installed as a $12.00 chance with Ladbrokes but always looked a little over the odds considering his track record.

“Decent test, it’s throwing him in the deep end and seeing how he sits” Ryan said prior to the race. 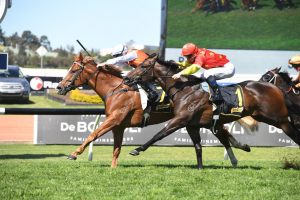 “The horse has shown good ability, he’s done nothing wrong going to the races so far. 1100m, home track, smallish field, get a chance to see where we sit with him.”

Cosmic Force had his work cut out after getting trapped deep four-wide. Standout, meanwhile, enjoyed a brave ride from jockey Tommy Berry as the winning hoop moved up on the inside to match Cosmic Force’s speed.

“He’s always been a horse as an early two-year-old that caught my eye and obviously he’s a full brother to Overreach who I won the Slipper on” Berry said.

Standout switched off nicely in the early stages of the race before storming to the front over the final 100m. After some worrying signs earlier in his career, Ryan said the key was waiting for the horse to mature.

“He wanted to do things a bit wrong in the Autumn, he wanted to overrace. Kerrin McEvoy rode him and said he’s the hardest two-year-old he’s ever ridden, so we only gave him one more trial and tipped him out. Thought we’d give him four months and let him develop” Ryan said.

Despite Saturday’s impressive performance, Ryan has no plans to head to Melbourne. Instead, Standout’s target is the Autumn with a potential run in next month’s Group 2 Roman Consul Stakes (1200m) at Randwick on October 12 thrown in between.

“He might only have one more, there’s the Roman Consul or the Brian Crowley. Really, I reckon this horse will come into his own in the Autumn. He’s a big horse and those big horses, they get better as they get older. We’ve nurtured him so far so we won’t be in a hurry” Ryan said.

The Holy One still at double figure odds for 2019 Caulfield Guineas after Stutt...
Scroll to top