Melbourne Cup winner Vow And Declare will spearhead the latest addition to the 2020 Brisbane Winter Racing Carnival when he targets the new Group 2 $1.5 EVA Air Q22 over 2200m at Eagle Farm on Stradbroke Handicap Day. 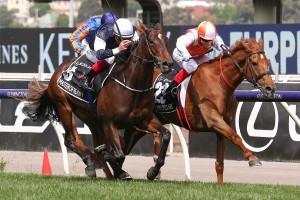 Melbourne Cup winner Vow And Declare, above in orange and white colours, will target the EVA Air Q22 at Eagle Farm. Photo by Ultimate Racing Photos.

Melbourne Cup winning trainer Danny O’Brien campaigned Vow And Declare in Brisbane during the 2019 Winter Carnival before he won the Group 1 $8m Lexus Melbourne Cup (3200m) at Flemington on the first Tuesday in November.

O’Brien said that program worked pretty good with Vow And Declare winning the Group 3 $200,000 Lazy Yak Tattersall’s Cup (3000m) at the end of the Winter Carnival and the Flemington trainer will send the four year old to Brisbane again next year to run in the weight for age EVA Air Q22 on June 6 before he attempts to defend his Melbourne Cup title.

“Without the Brisbane campaign I don’t think he wins the Melbourne Cup,” O’Brien said.

“It allowed me to prepare him the way I wanted which was to retain that residual fitness and only have a light spring. He did that with two runs and came into Melbourne Cup Day third-up and won.

“The best part for us is that Eagle Farm is back and in such great shape. We really enjoyed running our horses there last winter. It’s one of Australia’s great racetracks.”

The EVA Air Q22 replaces the weight for age P J O’Shea Stakes and is one of many changes to the 2020 Brisbane Winter Racing Carnival that will see the Group 1 $600,000 Queensland Derby (2400m) brought forward to May 23 after being a fixture on Stradbroke Handicap Day and the Group 1 $500,000 Queensland Oaks (2200m) will return to its proper spot at Eagle Farm and be run on May 30.

The Group 2 $400,000 Brisbane Cup will also return to his traditional distance of 3200m and remain as the feature staying race on Stradbroke Handicap Day.

“A $1.5 million weight-for-age race on Stradbroke Day is not just an exciting addition to the Queensland racing calendar, but the nation as whole,” Racing Queensland CEO Brendan Parnell said.

“With a new-look program, classic winners can target the Q22, while older horses can do likewise through the Hollindale Stakes or Doomben Cup.”

“The May 23 and May 30 meetings each provide races that lead into our two exciting $1.5 million target races – the TAB Stradbroke and the EVA Air Q22.

“And the return of the Brisbane Cup to two miles enables trainers to use a June staying test as a Lexus Melbourne Cup springboard in a similar way to the path forged by overseas horses.”