Bargain basement buy Surprise Baby has already repaid his owners over one hundred times his purchase price but a win in today’s Melbourne Cup will well and truly propel him into the millionaire category. 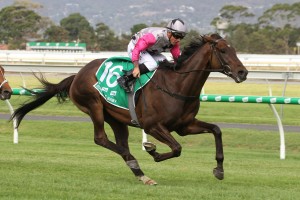 Surprise Baby, above, will run in the 2019 Melbourne Cup at Flemington. Photo by Jenny Barnes.

Horsham trainer Paul Preusker recalls only having to pay $5000 for Surprise Bay in New Zealand and admits that the plane trip back to Australia cost more than his buying price but the five year old already has over $700,000 in the bank.

“We were just making sure he was worth the plane flight home,” Preusker told the Camden Haven Courier.

“It probably cost more to fly him home than to buy him.

“He wasn’t a special looking horse, but a nice, straight, tough looking horse. The rest is sort of a bit of patience and a bit of hard work.”

Surprise Baby has only raced on ten occasions and after winning on debut in a Horsham Maiden in October 2018, has gone on to win four more times, including a win in the Group 2 $400,000 Adelaide Cup (3200m) at Morphettville on March as well as a last start win in the Group 3 $500,000 The Bart Cummings (2520m) at Flemington on October 5.

The lightly raced Surprise Baby is set to take on some mature European and Japanese stayers and Preusker is keen to see his charge take up the challenge.

“I guess it’s intimidating to consider the worth of the horses competing,” Preusker said.

“But I suppose … the horse doesn’t know what its purchase price was, and he’s thinking like a winner, so we’ll run with that.”

“It’s been a big trip for him to get here, and next year hopefully he comes back an even better horse.”

Surprise Baby was out of luck at the barrier draw and will jump from gate twenty in the twenty-four horse Melbourne Cup field and will be ridden again by Jordan Childs who was aboard Surprise Baby for his win in the Bart Cummings.

Surprise Baby has come in for some solid support in the betting at Ladbrokes.com.au and has firmed in from $17 to $13 in the lead up to ‘The Race That Stops A Nation.’

The Chris Waller trained Finche heads the Melbourne Cup market order at $8.50 at Ladbrokes.com.au just ahead of the Caulfield Cup winner Mer De Glace and the Lindsay Park trained import Constantinople at $9.50.

The post Surprise Baby can join the millionaires club with win in 2019 Melbourne Cup appeared first on HorseRacing.com.au.