Steel Prince’s win in The Andrew Ramsden in May made sure that he escaped the ballot for today’s Melbourne Cup at Flemington but the Anthony Freedman trained stayer is now one of the outsiders of the field after failing to be placed at his next three starts. 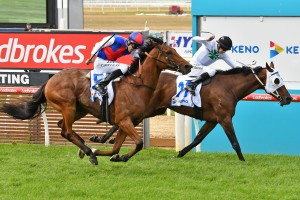 Steel Prince, above in red, blue and white colours, is one of the outsiders of the 2019 Melbourne Cup Field. Photo by Ultimate Racing Photos.

Ladbrokes.com.au have Steel Prince marked at $71 for the Group 1 $8m Lexus Melbourne Cup (3200m) and the six year old will have to improve greatly to figure amongst the prizemoney after finishing seventh last start in the Group 3 $400,000 Geelong Cup (2400m) at Geelong on October 23.

Brett Prebble gets the ride on Steel Prince (barrier 16) and said that the reports from the stable has been positive since the Geelong Cup .

“I haven’t spoken to Anthony directly but I’ve heard through the owners that he’s very happy with the horse,” Prebble told AAP.

“He’s taken no problem from his mishap at Caulfield and he’s had the fitness run at Geelong.”

Steel Prince suffered a setback to his Melbourne Cup preparation prior to the Geelong Cup when he suffered some minor leg injuries when he kicked out in the barriers and was subsequently a late scratching for the Group 2 $400,000 Ladbrokes Herbert Power Stakes (2400m) at Caulfield on October 12.

The post Steel Prince is one of the outsiders in 2019 Melbourne Cup betting appeared first on HorseRacing.com.au.

Magic Wand gets the nod from the Aidan O’Brien stable in 2019 Melbourne C...
Scroll to top