Perth’s champion jockey William Pike rates his win on Regal Power in the $1m Kirin Railway Stakes (1600m) on Saturday as his most memorable of his three victories in the first Group 1 feature of the Ascot Racing Carnival in Perth. 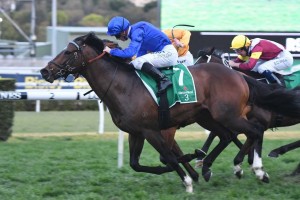 Best Of Days, above, finished second to Regal Power in the 2019 Railway Stakes at Ascot in Perth. Photo by Steve Hart.

The Grant and Alana Williams trained Regal Power was Pike’s third win in the Railway Stakes after collecting the major prize last year on Galaxy Star for the same training partnership as well as winning on Elite Belle in 2014 for Grant Williams before he teamed up with his wife.

“I enjoyed this one a lot more than any of my others,” Pike told SKY Thoroughbred Central.

Regal Power jumped from barrier thirteen in the fourteen horse Railway Stakes field and Pike always had him near the tail of the field in the first half of the race.

Pike was unable to get near the fence and Regal Power had a very tough run throughout the race but responded to the champion jockey’s urging from the 700m when he went forward three and four horses wide.

Regal Power ($10) was the widest runner on the home turn but with the blinkers on for the first time, the four year old gelding stormed to the line out in the middle of the track to record a half a length win over the James Cummings trained Best Of Days ($9.50).

The Neville Parnham trained Platoon ($31) was one of the outsiders of the field but ran a mighty race to gain third spot while the $5 favourite Tellem We’re Comin was never in the hunt and could only manage to finish in tenth position.

Pike intentionally took Regal Power back to the tail of the field in the early stages and was hoping that luck came his way in the latter part of the race.

“I felt like the pressure was off a bit. Wide barrier…I just got to go out and wing it and hope it went my way and it did,” Pike said.

“I got back a long way but I actually had a pretty good run.

“Inside the last furlong that’s where his character kicked in.

“He could either say ‘I’ve gone too wide and I’ve done too much’ or ‘I’m here to play’ and he never laid down.”

Regal Power is now the $8 second favourite at Ladbrokes.com.au behind his stablemate Tuscan Queen who heads the market order at $4.20 for the Group 1 $1m Magic Millions Kingston Town Classic (1800m) at Ascot on December 7.