An excellent ride from Jye McNeil has helped Oceanex end her losing streak with an impressive victory in the 2019 Matriarch Stakes at Flemington this afternoon. 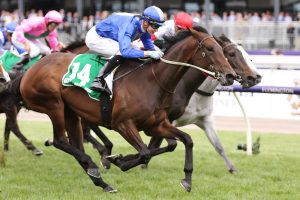 Oceanex had been beaten as a short-priced favourite in a number of races this Spring, but there would be no denying her at Flemington.

Jye McNeil bided just off the speed on Oceanex and he timed his run to perfection to propel the Ocean Park mare over the top of Miss Siska and Greysful Glamour in the concluding stages.

McNeil admitted after the race that he thought Oceanex would need some luck in running from the inside barrier, but he was delighted with how the race panned out.

“I didn’t think that the barrier was going to suit, especially the way that the track was playing early on,” McNeil said.

“We were able to edge away from the fence and we had plenty of time to build into it.

“I just wanted to bounce and ride her where she was happy.

“We ended about fifth or sixth, three pairs back on the fence and we were able to just peel out around the runners in front.

“She found the line really strongly.

“She seems to have pulled up really well.

“She really deserves this win today.”

Co-trainer Mick Price revealed after the Matriarch Stakes that he was worried that Oceanex would struggle to turn-the-tables on last start winner Greysful Glamour and he was delighted to see the four-year-old claim another race win after having very little luck during her Spring Racing Carnival campaign.

“I was a bit concerned with the six lengths that she was beaten at Moonee Valley and I wasn’t sure how we were going to make that up, but barrier one was good and the big track at Flemington suited.

“She has had a really good prep without having a lot of luck, but this Group 2 win makes her such a valuable broodmare now.”

Miss Siska was able to bravely fight on to finish second, while Aristocratic Miss snuck into the placings at the big odds of $126.