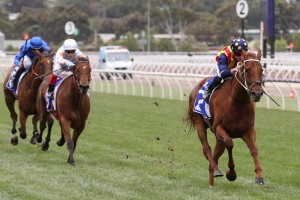 Nature Strip, way out in front with the blue cap with white spots, wins the 2019 Darley Sprint Classic at Flemington. Photo by Ultimate Racing Photos.

Winning jockey James McDonald steered Nature Sprint straight to the Grandstand side fence from the outside barrier in the nine horse field and let the speedster do what he does best, set a solid pace out in front.

McDonald still had Nature Strip ($3.60) under a tight hold at the 300m mark and when he released the brakes, the Chris Waller trained sprinter exploded away from his opposition to record a dominant three and a quarter lengths win.

Manikato Stakes winner Loving Gaby ($7.50) was doing her best work at the finish to claim the runner’s up spot ahead of the Kris Lees trained In Her Time ($12).

The Anthony Freedman trained Santa Ana Lane was sent out as the $2.15 favourite and after settling at the tail of the field in the early stages, failed to make any impression on the placegetters and wound up in fifth position.

Today’s win in the Darley Sprint Classic was Nature Strip’s third Group 1 victory after winning the 1 $700,000 OOH!Media Galaxy (1100m) at Rosehill during the 2019 Sydney Autumn Carnival as well as the $1m Charter Keck Cramer Moir Stakes (1000m) at The Valley two starts back during his Spring Carnival campaign.

“It is capping off a pretty good season for the horse. He has done a great job and is now the winner of three Group 1 races and that was simply as good as it gets from a sprinter’s perspective,” Waller said.

“I have been just lucky enough to take the horse over and put a bit of fine-tuning in.”

The Flemington specialist made it four wins from four starts down the straight, today’s win his second over the 1200m course.

“I think it suits his style. He just rolls comfortably. They are not taking you on like they are from bad draws in 1200m races and he is allowed to roll.”

“And he is a very fast horse, probably one of the fastest horses in the world and when James slipped him a bit of rein he just went bang.”