Tassie star Mystic Journey remains in contention for the 2019 Ladbrokes Cox Plate (2040m) following the release of the first acceptances for the Group 1 $5m Weight For Age Championship at The Valley on October 26. 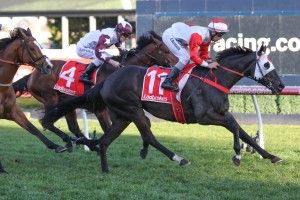 Mystic Journey, above, remains in contention for the 2019 Ladbrokes Cox Plate after first acceptances. Photo by Ultimate Racing Photos.

The numbers for the Cox Plate have been reduced to 102 after 187 horses were in the original nominations.

Mystic Journey is the winner of eleven of her fourteen race starts and kicked off her Cox Plate campaign with a first up win in the Group 2 $200,000 P.B. Lawrence Stakes (1400m) at Caulfield on August 17.

The Adam Trinder trained Mystic Journey took all before her during the 2019 Melbourne Autumn Carnival and was undefeated from four runs during the Autumn as a three year old filly and gained everybody’s attention with wins in the Group 1 $1m Australian Guineas (1600m) and in the $5m All-Star Mile (1600m) at Flemington.

Trainer James Cummings is also giving himself a reasonable chance of getting amongst the Cox Plate prizemoney with seven of his Godolphin owned horse among the first acceptances, including war horse Hartnell and his imported six year old Avilius.

Hartnell was runner up to Winx in the 2016 Cox Plate when trained by John O’Shea and has had two runs back this preparation for a first up third to Mystic Journey in the P.B. Lawrence Stakes followed by a fourth to Scales Of Justice in the  Group 1 $1m New Zealand Bloodstock Memsie Stakes (1400m) at Caulfield on August 31.

The Lindsey Smith trained Scales Of Justice is also among the first acceptances for the Cox Plate and if he can go through the Spring Carnival without aggravating his old injury, will be a force to reckon with in the Weight For Age Championship.

Trainer Chris Waller also still holds a strong hand with sixteen of his charges still in the running for the Cox Plate and includes Verry Elleegant, True Detective, Yes Yes Yes and Kings Will Dream.

The Lindsay Park Team of David and Ben Hayes and Tom Dabernig have strength in numbers as well and have sixteen first acceptances for the 2019 Cox Plate with dual Australian Cup winner Harlem among them.

Second acceptances for the Ladbrokes Cox Plate will be taken on Tuesday, September 24, 2019.