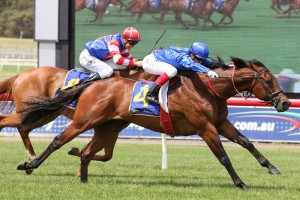 Viridine, above, is one of three James Cummings trained runners to line up in the 2019 Winterbottom Stakes at Ascot in Perth. Photo by Ultimate Racing Photos.

The Miller trained Valour Road and Flirtini are two of fifteen sprinters who make up the final field for the Group 1 feature sprint of the 2019 Ascot Racing Carnival and the Perth trainer is finding it hard to split the pair.

“I wouldn’t want to pick, happy to have both,” Miller told The Races WA.

“Both have impeccable form. One rolls forward and Flirtini can sit back, so we have both bases covered.”

“It is great. It is good to be playing in the big Group 1s that are on over here and we have two live chances.”

“Excellent. Weight was good, ate up over the weekend and she is on track,” he said.

Valour Road has had one run back from a spell for a fourth in the Prince Of Wales Stakes but has pleased Miller since with a third placing in a 950m Lark Hill barrier trial on November 18.

“I thought it was really good,” Miller said.

“He had a bunny to follow and we weren’t out there to break the clock or do anything and he went to the line under a stranglehold and through the line he was steaming past them.”

“It was a really good trial, in slick time, and he was in neutral.”

“When he got back he wasn’t blowing and his heart rate was low and he didn’t blow up over the back so I have him cherry ripe and we are right on target now and he won’t even need a hard gallop on Tuesday. We have him perfect.”

Miller is not concerned that Valour Road is going into the Winterbottom Stakes with only one lead up and said that the four year old is in peak condition.

“We have done it a few times. Last year he went from the Belgravia into the Winterbottom and he ran fifth and he is a superior horse now to what he was then,” Miller said.

“I have good handle on him and he is pretty easy to train.”

Chris Parnham will ride Valour Road again and Paul Harvey gets his chance to score a hat trick of wins on Flirtini.

Godolphin’s blue army is set to come out in force in the Winterbottom Strakes on Saturday with trainer James Cummings set to saddle up three runners, Trekking (Kerrin McEvoy), Home Of The Brave (Damian Lane) and Viridine (Damien Oliver).

Trekking was the winner of the Group 1 $1.5m Stradbroke Handicap (1400m) at Eagle Farm during the 2019 Brisbane Winter Carnival and has pretty handy Spring Carnival form that includes a third behind Yes Yes Yes and Santa Ana Lane in the $14m The Everest (1200m) at Randwick on October 19.

The post Miller has 2 chances for the locals in 2019 Winterbottom Stakes appeared first on HorseRacing.com.au.