High profile jockey Kerrin McEvoy has been called upon to test Cox Plate runner-up Castelvecchio in the lead up to the major three year old Group 1s during the 2020 Sydney Autumn Carnival. 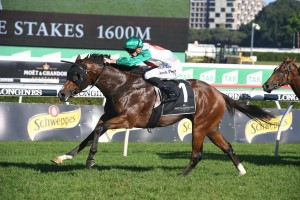 Jockey Kerrin McEvoy will ride Castelvecchio, above, in the early part of his 2020 Autumn Carnival campaign. Photo by Steve Hart.

Melbourne’s premiership winning jockey Craig Williams was aboard Castelvecchio when he finished a brave second to Japanese super star Lys Gracieux in the Group 1 $5m Ladbrokes Cox Plate (2040m) at The Valley during the 2019 Melbourne Spring Carnival.

“I know Craig (Williams) is committed to a few horses up there in Melbourne at this stage so Kerrin McEvoy will ride the colt in his first few runs,” Litt told Racenet.

“He will trial him and ride him in his first few runs and see what happens from there.”

Castelvecchio is booked to stand at Arrowfield Stud when his racing career comes to an end but Litt said that the new part owners were keen for the colt to line up in the 2020 Cox Plate.

“Arrowfield has been fantastic and they are very keen to see him race on and get out there and hopefully we can see him in a Cox Plate at the end of this year,” Litt said.

“There is a lot of water to go under bridge between now and then but I’d like to think he will stay in training for quite a while.

“It was very nice to watch Lys Gracieux win in Japan – and get named horse of the year over there – it certainly makes Castelvecchio look good.

“He will kick off in the barrier trials at the end of the month here in Sydney and then head onto the Hobartville and then we have got a few options.

“We have nominated in a few races to leave our options open.

“The horse is fantastic – he has done really well out in the paddock.

“He is a very highly strung horse but he seems to hold his condition well.”

The $1m Mostyn Copper Randwick Guineas (1600m) at Randwick, the $600,000 Sky Racing Rosehill Guineas (2000m) at Rosehill and the $2m Harrolds Australian Derby (2400m) at Randwick, all Group 1s for the three year olds during the Sydney Autumn Carnival, are likely targets for Castelvecchio.

Castelvecchio is also among the nominations for the $5m All-Star Mile (1600m) at Caulfield on March 14.

Castelvecchio is the winner of three of his nine race starts which includes a win during his two year old season in the Group 1 $500,000 Champagne Stakes (1600m) at Randwick during the 2019 Sydney Autumn Carnival.