Ciaron Maher and David Eustace have only one runner in Tuesday’s $7 million Lexus Melbourne Cup (3200m), and he could turn out to be the surprise packet in the field.

Southern France, a five-year-old Irish import by Galileo, will make his Australian debut in the race that stops a nation hoping to capture a slice of history at Flemington.

It’s been a big year for the stable after Loving Gaby won the Group 1 Ladbrokes Manikato Stakes at The Valley a fortnight ago, and it could turn out to be even more successful as Maher saddles his first-ever Melbourne Cup hopeful.

The international import was handed over to Maher from Aidan O’Brien after running third in the Group 1 Irish St Leger (2816) at The Curragh back in September – his second placing from seven starts this year. 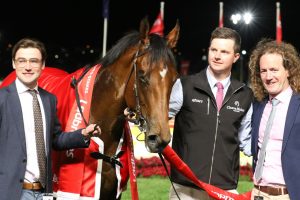 Southern France’s only win in 2019 came at Group 3 level back in August, but he has shown serious signs of improvement since returning to the races as a four-year-old.

Like a handful of others, the barrier draw wasn’t kind to Maher and connections on Saturday. Southern France drew wide in barrier 14 – a gate no horse has won from since Makybe Diva did so in 2003.

Even so, Maher is still in good spirits about Southern France’s chances as the third acceptor should sit one or two off the speed.

“Fourteen is good. Probably anywhere around the middle is fine. Not much you can do about it but it’s better than the outside.

Jockey Mark Zahra will be in the saddle on Tuesday hoping to make up for a horror Victoria Derby ride aboard Maher’s top chance Thought Of That. Zahra, like Maher, has never won the Melbourne Cup before, but he does share something in common with Aidan O’Brien trained horses.

Zahra famously rode Merchant Navy to a win in the Group 1 Coolmore Stud Stakes (1200m) in 2017 under trainer Aaron Purcell. Merchant Navy was eventually handed over to Maher, who sent the horse to O’Brien.

Merchant Navy won the Group 1 Diamond Jubliee at Royal Ascot last year under O’Brien, which meant he eventually owed Maher a favour. Now, Maher is hoping Southern France can display some of that exciting turn of foot Merchant Navy was known for down the straight on Tuesday and salute for punters at $26.00 odds.