The Aidan O’Brien trained Magic Wand gets the nod from the stable over her stablemates despite drawing the outside barrier in the 2019 Group 1 $8m Lexus Melbourne Cup (3200m) at Flemington today. 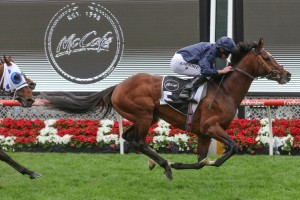 Hunting Horn, above, is one of three runners for trainer Aidan O’Brien in the 2019 Melbourne Cup at Flemington. Photo by Ultimate Racing Photos.

Top European jockey Ryan Moore will have the job ahead of him from barrier twenty-four but stable representative T J Comerford selected her above the stable’s other two Melbourne Cup runners, Hunting Horn and Il Paradiso.

“We have good chances. I really like Magic Wand, but I hope no more rain comes. I will pick Magic Wand even though she has drawn bad. I know she is a good filly. She is my preference,” T J Comerford told Sky Racing.

“Very pleased with them and everything has been very smooth up to now, so no problems.”

Magic Wand was a Group 1 runner-up at her two runs before heading to Australia for a second in the Arlington Million (2000m) at Arlington in the United States and a second in the €1.25m Irish Champion Stakes (2012m) at Leopardstown in Ireland on September 14.

Magic Wand has had one Melbourne Cup lead up run in Australia for a fourth to Lys Gracieux in the Group 1 $5m Ladbrokes Cox Plate (2040m) at The Valley on October 26.

Bookies at Ladbrokes.com.au have Magic Wand marked at $19 for the Melbourne Cup while her stablemate Il Paradiso is more fancied in the betting at $14 and has also drawn wide at seventeen for Wayne Lordan.

O’Brien’s third runner Hunting Horn is the roughest of the stable’s three runners at $41 and will jump from gate eleven with Seamie Heffernan in the saddle.

The post Magic Wand gets the nod from the Aidan O’Brien stable in 2019 Melbourne Cup appeared first on HorseRacing.com.au.