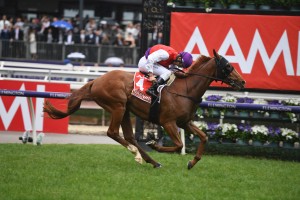 Jockey Damien Oliver, above winning the Victoria Derby on Warning, will ride Mustajeer in the 2019 Melbourne Cup at Flemington. Photo by Steve Hart.

“There’s a stack of chances and I probably feel he’s one of them.”

“So we’re pretty confident we’ve got him there as good as he can be. Where that means he runs, I don’t know, but it’s all we can do.”

Lees took over the training of Mustajeer after he won the £1 million Ebor Handicap (1 mile, 5 furlongs, 188 yards) at York in England on August 24 and sent foreman Cameren Swan to Newmarket in England to oversee the Australian Bloodstock owned stayer’s Melbourne Cup preparation before coming to Australia.

“Cameren has been with the horse the whole time and he’s done a wonderful job.”

Mustajeer has had one run in Melbourne for a sixth with Damien Oliver in the saddle to Mer De Glace in the Group 1 $5.15m Stella Artois Caulfield Cup (2400m) at Caulfield on October 19.

“We’ve got a chance in a very tough race. There’s so many Europeans in the race so it’s hard to line up the form,” Oliver told The Courier-Mail.

“He ran well in the Caulfield Cup and I feel he’s come on from that run after riding him on Friday.”

The Chris Waller trained Finche heads the Melbourne Cup market order at $8.50 at Ladbrokes.com.au just ahead of the Caulfield Cup winner Mer De Glace and the Lindsay Park trained import Constantinople at $9.50.

The post Lees rates Mustajeer one of the top chances in 2019 Melbourne Cup field appeared first on HorseRacing.com.au.