Local star Le Romain has been given the top weight for the inaugural running of the new race on Racing New South Wales Spring Calendar, the $1m The Hunter (1300m) at Newcastle’s standalone Metropolitan class meeting on Saturday. 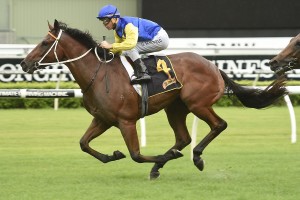 Le Romain, above, has been given the top weight for The Hunter at Newcastle. Photo by Steve Hart.

The Hunter has attracted twenty-six nominations and the Kris Lees trained Le Romain has been allocated the top weight of 59.5kg ahead of the James Cummings trained Home Of The Brave who was given 58kg.

Lees has a total of five nominations for The Hunter with Invincible Gem (55.5kg), Graff (57kg), Tactical Advantage (56kg) and Miss Fabulass (53kg) joining their stablemate Le Romain in the nomination’s list.

The well performed Graff has been installed as the early favourite for The Hunter at $4 with Ladbrokes.com.au ahead of his multiple Group 1 winning stablemate Le Romain at $8.

“Timing wise it is suiting a couple of horses for various reasons. Le Romain we backed off because I wasn’t happy with his first couple of runs and he returned in good order the other day,” Lees told Racing New South Wales Nesdesk.

“It was similar with Graff, we backed off and reset for this race. It suits well where they are at in their preparations.’’

The seven year old war horse was then back amongst the minor prizemoney with a third to Pierata in the $1m Redzel Stakes (1300m) at Rosehill November 2.

The post Le Romain top weight for 2019 The Hunter appeared first on HorseRacing.com.au.