Giant killing jockey Jamie Kah gets her chance to win week to week Group 1s as the stand in jockey for So Si Bon in Saturday’s $500,000 Ladbrokes Sir Rupert Clarke Stakes (1400m) at Caulfield. 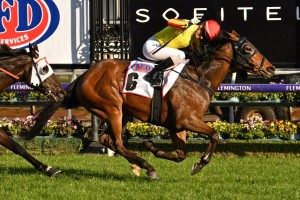 Kah claimed all the attention after she guided the $101 outsider Gatting to victory in last Saturday’s Group 1 $750,000 PFD Food Services Makybe Diva Stakes (1600m) at Flemington to give her her second Group 1 win after she claimed the $1.5m Australian Cup (2000m) at Flemington during the 2019 Melbourne Autumn Carnival on the Lindsay Park trained Harlem.

Lindsay Park co-trainer Tom Dabernig was happy to snap up Kah to replace the suspended Luke Nolen on So Si Bon in the Sir Rupert Clarke Stakes.

“We tried to go for a rider that is a bit like Luke with soft hands,” Dabernig told AAP.

“The horse tends to respond to that and she is clearly in great form.

“Luke’s really clicked with the horse and hopefully Jamie will also.”

Dabernig is a member of the Lindsay Park Team along with David and Ben Hayes, and said that So Si Bon is in great order heading into the Sir Rupert Clarke Stakes.

Kah will be able to settle So Si Bon in the middle of the pack from barrier seven in the fifteen horse field before finding clear space on the home turn to give the gelding an uninterrupted run to the line.

So Si Bon is marked as a $9 chance at Ladbrokes.com.au for the Sir Rupert Clarke behind the $2.90 favourite Begood Toya Mother and stablemate Amphitrite at $7.

Begood Toya Mother will jump from barrier three with regular rider Declan Bates in the saddle while Craig Williams will keep his association going with Amphitrite who has drawn next to So Si Bon in eight.