History was made at the Gold Coast on Saturday as Invincibella became the first horse to go back-to-back-to-back in the $1 million Magic Millions Fillies & Mares (1300m).

The win marked Chris Waller’s second of the day after getting Madam Rouge home in the race prior. Waller said the horse has become one of his favourites in the stable after the win marked his eighth on Magic Millions Day.

“It’s a good effort, she’s been a great horse. When a horse has been around the stable that long they’re real pets, and she’s a class pet” Waller told Sky Racing. 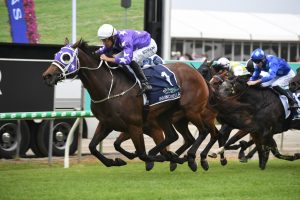 Invincibella has now won a record three times on Magic Millions day.
She has now won $3,072,603 in prize money.
$1,780,000 of that has come in those three wins at the Gold Coast. Photo Credit: Steve Hart.

“You can say this three years later, but after each year when you do win a race you do get a bit of ownership and you do want to go back and defend your crown. So, you got to be good enough of course, and it’s good to be involved with these sorts of horses.”

Bowman had plenty of work to do moving third from the rear to come forward at the turn. Once Invincibella found daylight though, the horses’ explosive turn of foot was enough run down eventual second placegetter Irithea.

Invincibella was second-up at the Gold Coast on Saturday after running sixth in the Listed Christmas Classic (1200m) at Randwick late last month. She has now amassed over $3 million in prize money, $1.7 of which has come at the Gold Coast.