Dual Group 1 winner Hey Doc will return from injury on Saturday if co-trainers Tony and Calvin McEvoy decide to go ahead with a start in the Group 3 $160,000 Kevin Heffernan Stakes (1300m) at Sandown. 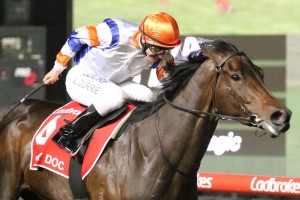 Hey Doc, above, is set to return from injury in the Kevin Heffernan Stakes at Sandown. Photo by Ultimate Racing Photos.

Hey Doc hasn’t raced since running eighth in the Group 2 Bobby Lewis Quality (1200m) at Flemington during the 2018 Melbourne Spring Carnival and is one of the eighteen nominations for the Kevin Heffernan Stakes.

Hey Doc has recovered from an operation to remove bone chips from a joint and Tony McEvoy said that he has taken the six year old’s preparation for his return along nice and steady.

“It’s been a long build-up for him and I hope it’s enough,” Tony McEvoy told AAP.

“He’s had a couple of trials. He trialled at Tatura and he trialled at Flemington and he’s had a trip away here to Sandown for a gallop.”

“He’s a bit of an older horse now so we took our time with him but he has come back magnificent.”

“So it’s just fantastic to have him back.”

A pass mark for Hey Doc in the Kevin Heffernan Stakes will see the gelding return to Group 1 racing in the $1m Crown Perth Winterbottom Stakes (1200m) at Ascot in Perth on November 30.

The post Hey Doc to return from injury in Kevin Heffernan Stakes appeared first on HorseRacing.com.au.