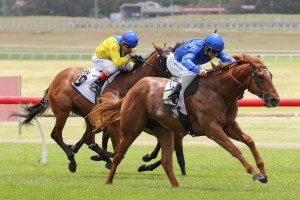 Hanseatic, above, is in great order for the 2020 Golden Slipper at Rosehill. Photo by Ultimate Racing Photos.

Hanseatic was given a short freshen up after running second to Tagaloa in the Group 1 $1.5m Ned Blue Diamond Stakes (1200m) at Caulfield on February 22 and has settled in well in Sydney.

“He came down here (Pinecliff) for a week or 10 days after the Blue Diamond, he had a good little break but he didn’t miss any work,” Anthony Freedman told racing.com.

“He’s had a good few gallops, he’s obviously had the trial up there last week which was solid and he worked nicely on Tuesday morning on soft ground and the thought was that he was pretty good in it.”

“We’re going in there with the horse in good order and if there is soft ground it’s not something I’ll be too concerned about.”

“I think the Blue Diamond form is up there, obviously the horse (Farnan) that has been winning in Sydney will be hard to beat because he puts himself forward.”

Sam Freedman is supervising Hanseatic Golden Slipper preparation in Sydney and said even though the Street Boss colt changed legs a couple of time in his 1045m barrier trial win at Randwick last Thursday, there was nothing to worry about.

“He trialled very well, he might have changed legs a couple of times, but he was comfortable and he’s come through it in good order,” Sam Freedman said.

Hanseatic’s only defeat from four race starts was his second to Tagaloa in the Blue Diamond Stakes and the two colts are set to clash again in the Golden Slipper.

Hanseatic has a great chance to win back to back Golden Slippers for Godolphin’s Australian base after the James Cummings trained Kiamichi carried their famous royal blue colors to victory last year.

The Cummings trained Thermosphere will also sport the renowned  royal blue colours in the 2020 Golden Slipper.

Cranbourne based co-trainers Trent Busuttin and Natalie Young have given Tagaloa the benefit of a run in Sydney and the colt ran home strongly to finish second to the $4.80 Golden Slipper favourite Farnan in the Group 2 $300,000 UNSW Todman Stakes (1200m) at Randwick a fortnight ago.

Tagaloa is the $5.50 second favourite at Ladbrokes.com.au ahead of Hanseatic on the third line of betting at $7 while Thermosphere is rated a $31 chance.

The post Hanseatic is on the right leg for the 2020 Golden Slipper appeared first on HorseRacing.com.au.

2020 The Galaxy Results: I Am Excited Wins First Group 1 in a Photo Finish
Scroll to top