Last Saturday’s Magic Millions 2yo Classic winner Away Game will be set for the 2020 Group 1 $3.5m Longines Golden Slipper (1200m) at Rosehill on March 21. 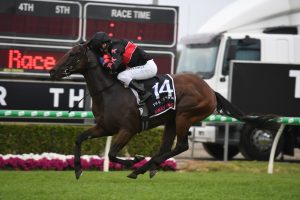 Away Game, above wins the 2020 Magic Millions 2yo Classic at the Gold Coast. Photo by Steve Hart.

Outsider Away Game scored an upset win at $41 when she took home the major portion of the $2m in the The Star Gold Coast Magic Millions 2yo Classic (1200m) at the Gold Coast.

The Ciaron Maher and David Eustace trained filly is now on the second line of betting for the Golden Slipper at $15 at Ladbrokes.com.au just behind the $12 favourite Dame Giselle.

The Team Snowden trained Dame Giselle gained her top spot in the Golden Slipper betting with a commanding win in the $1m Golden Gift (1100m) at Rosehill on November 9.

Away Game is the winner of two of her three race starts and co-trainer David Eustace indicated that the Snitzel filly will have one lead up run into the Golden Slipper.

“She will be one run into the Slipper,” co-trainer David Eustace told AAP.

“Whether it’s the Silver Slipper leading in we can work that out. She will have a few easy days and then look towards the Slipper.”

Away Game is the winner of $1,243,800 in prizemoney but the Magic Millions 2yo Classic winning cheque of $1,165,000 will be excluded from her prizemoney earnings in determining her order of entry in the Golden Slipper according to the balloting conditions of the race.

The post Golden Slipper Autumn Target for Away Game appeared first on HorseRacing.com.au.