Last year’s fourth placegetter Finche is solid in the betting for the 2019 Group 1 $8m Lexus Melbourne Cup (3200m) at Flemington on Tuesday. 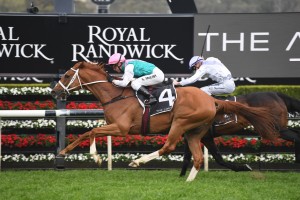 Finche, above, is well in contention in the 2019 Melbourne Cup betting. Photo by Steve Hart.

Finche finished fourth for trainer Chris Waller behind Cross Counter in the 2018 Melbourne Cup and following some handy recent form is marked at $10 at Ladbrokes.com.au for this year’s ‘Race That Stops A Nation’ on the first Tuesday in November.

Waller said that Finche is a stronger horse twelve months on from his first Melbourne Cup appearance and the master trainer can’t fault the French import’s 2019 preparation.

“He has got a great mindset, so everything’s in order for Tuesday’s big race.”

“So a year on, I think a more physical and obviously a stronger horse for those reasons. He’s had time to adjust to Australia and he has developed into a stronger horse.”

“This time last year he was quite a lean horse that it was all quite new to.

“Even in the Melbourne Cup last year, he got to the front and didn’t really know what it was all about.”

Finche found the winner’s stall at his second run this campaign in the Group 3 $160,000 The Agency Real Estate Kingston Town Stakes (2000m) at Randwick on September 21 and then finished a nose second to his stablemate Kings Will Dream in the Group 1 $500,000 Turnbull Stakes (2000m) at Flemington on October 5.

Finche was then handed a horror barrier in the Group 1 $5.15m Stella Artois Caulfield Cup (2400m) at Caulfield on October 19 and after having a horrid run only finished one and a half lengths from the winner Mer De Glace in fifth spot.

The was a terrific trial for the Melbourne Cup on Tuesday and jockey Kerrin McEvoy has a great chance to score back to back wins after claiming last year’s Melbourne Cup on the Charlie Appleby trained Cross Counter.

In contrast to Finche jumping from barrier fifteen of eighteen in the Caulfield Cup, the French import will have the luxury of jumping from gate four in the twenty-four horse Melbourne Cup field and Waller will also saddle up $34 chance Youngstar who will jump from gate nine with Tommy Berry in the saddle.

Caulfield Cup winner Mer De Glace has been elevated to be the $6.50 Melbourne Cup favourite with Ladbrokes.com.au after drawing barrier two while the Lindsay Park trained Constantinople has lost the top spot and is now the $8 second pick.

Damian Lane will stay with the Japanese trained Mer De Glace while Joao Moreira will fly in from Hong Kong to ride Constantinople who also drew nicely at gate seven.

The post Finche is solid in 2019 Melbourne Cup betting appeared first on HorseRacing.com.au.