Rising star Rock has shortened dramatically for the 2019 Epsom Handicap after a last to first victory in today’s Group 3 $160,000 Australian Bloodstock Cameron Handicap (1500m) at Newcastle. 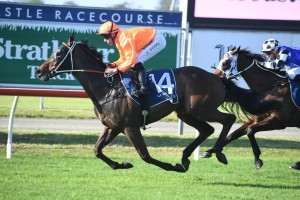 Rock, above, will now head to the Epsom Handicap after winning the 2019 Cameron Handicap at Newcastle. Photo by Steve Hart.

Winning jockey Tommy Berry took Rock back with the tailenders from a wide barrier and was happy to bide his time in the middle stages.

Berry was riding quiet on the home turn near the tail of the field but once the field swung for home, he released the brakes on Rock who zoomed past the rest of the field to record a very easy one length win.

Berry actually stood up in the irons as Rock cruised to the line and the ease of his win prompted bookies at Ladbrokes.com.au to trim up his price from $51 to $10 for the Group 1 $1m Epsom Handicap (1600m) at Randwick on October 5.

The John, Michael and Wayne Hawkes trained Rock was stepping out in open company for the first time after winning both of his restricted races this campaign and was the punters favourite at $3 and while he was well out of his ground in the early and middle stages, he looked the winner half way down the straight.

“He’s a good horse in the making and he’s got a date with an Epsom now which is fantastic,” co-trainer Michael Hawkes said.

“It was pretty ecstatic really.”

“He had to do it tough but he had a light weight. The way the race panned out early, he had no speed and had to go back further than what we would have anticipated.”

“But to Tommy’s credit he got him into a nice rhythm and got him going on the corner. He has that explosive turn of foot.”

The Kris Lees trained Articus proved that his win at Randwick last start at $21 wasn’t a fluke after running into second place ahead of $19 chance Nettoyer who was also doing her best work over the concluding stages.

The Gai Waterhouse and Adrian Bott trained Con Te Partiro was sent out as the $4.60 second favourite but was the disappointment of the Cameron Handicap.

Sam Clipperton settled Con Te Partiro in the middle of the pack but had trouble finding a clear run and never really had a chance to stretch out and wound up in tenth spot.