Randwick trainer Mark Newham heads to the Gold Coast with his smart three year old Diamond Thunder and is not ready to concede defeat to the short priced favourite Alligator Blood in the 2020 $2m Gold Coast Magic Millions 3yo Guineas (1400m) at the Gold Coast on January 11. 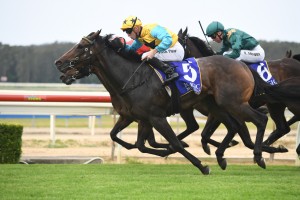 Diamond Thunder, above, will head to the Gold Coast to run in the 2020 Magic Millions 3yo Guineas. Photo by Steve Hart.

Diamond Thunder is the winner of five of his seven race starts and heads to the Gold Coast coming off a handy win in the $100,000 Magic Millions Wyong 3yo & 4yo Stakes (1200m) at Wyong on December 12 and has been installed as the $7 second favourite behind Queensland’s latest star Alligator Blood.

The David Vandyke trained Alligator Blood is the current $2.10 favourite for the Magic Millions 3yo Guineas and also has a very impressive record of six wins from seven starts.

Alligator Blood’s only defeat was a heart-breaking nose second to Super Seth in the Group 1 $2m Ladbrokes Caulfield Guineas (1600m) at Caulfield during the 2019 Melbourne Spring Racing Carnival.

The Sunshine Coast trained three year old then resumed from a short break to return to the winner’s list in the Listed $200,000 Pages Gold Edition Plate (1200m) at Eagle Farm last Saturday.

Newnham didn’t let Alligator Blood’s win go unnoticed but hasn’t conceded defeat and said that a lot of things can happen on the track and Diamond Thunder will be in for the fight.

“He (Alligator Blood) is very impressive. He only got beat half a head in a Group 1 race. He is certainly the one to beat heading up there,” Newnham told RSN Racing Pulse.

“But 1400m around the Gold Coast can throw up some tricky barriers and tricky positions in running so if you went up there trying to avoid one horse you would be doing yourself a disservice.”

“It is a track and a race that could make it hard on any horse, let alone a fav.”

“He (Diamond Thunder) is showing now with five wins from seven starts that what ever the race throws up he can adapt.”

“He has won a few races leading, he has now won a couple sitting well off the pace and come Magic Millions time and if we have to change tactics because of the barriers or the speed in the race, we know he is adaptable to do that.”

The post Diamond Thunder not out of the contest in 2020 Magic Millions 3yo Guineas appeared first on HorseRacing.com.au.

Bartley needs one more win to make the 2020 Magic Millions 2yo Classic fiel...
Scroll to top