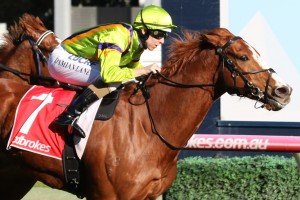 Crystal Dreamer, above, scored an upset win in the Heath 1100 Stakes at Caulfield. Photo by Ultimate Racing Photos.

The case wasn’t the same for the Lindsay Park trained Vega Magic who raced in second spot for the majority of the way behind the leader Ball Of Muscle before compounding over the final stages and will now struggle to gain a slot in the $14m The Everest (1200m) at Randwick on October 19.

Crystal Dreamer was having his first run back since finishing seventh in the Listed $120,000 Bendigo Bank Stakes (1200m) at The Valley twelve months ago and while co-trainer Mat Ellerton said that the gelding had prepared well for his comeback run, he didn’t expect him to win against some pretty slick company.

“The conditions of the race probably weren’t with him,” Ellerton said.

“He is coming back off an injury and you are just hopping they come through in one piece.”

“Probably didn’t think today was his day, but he prepped up well for the run.”

“We thought we would go back to a handicap in three weeks. In a set weights race today he wasn’t that well off.”

“He has won eleven races now so it is fantastic to see him back.”

The Mat Ellerton and Simon Zahra trained Crystal Dreamer (Damian Lane) was sent out as one of the outsiders of the field at $41 but was able to score by half a length over Gytrash ($4.20) with Ball Of Muscle ($4.20) holding on for third while the $2.10 favourite Vega Magic faded in the run to the line to finish last of the eight runners, seven and a quarter lengths from the winner.