Trainer Leon Macdonald will push ahead with a Caulfield Guineas campaign for Dalasan after the colt scored a dominant win in the Group 2 $200,000 Danehill Stakes (1200m) diwn the  Flemington straight today. 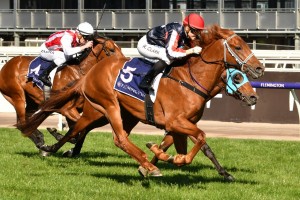 Dalasan, above, was a dominant winner in the Danehill Stakes at Flemington. Photo by Ultimate Racing Photos.

Dalasan kept his impressive record intact and made it four wins from five starts when he powered to the line to beat Dubious and Express Pass.

Dalasan has had one run beyond 1200m when second in the 1400m Group 2 $200,000 VRC Sires’ Produce Stakes at Flemington in March but Macdonald has no worries about the colt stepping back up to the 1400m and then up to the 1600m for the first time in the Caulfield Guineas.

“He was a bit lost up the straight but he overcome that and I am sure it is onwards and upwards from here. He will just get better with a bit of racing.”

Winning jockey Raquel Clark had Dalasan quickly into stride and sat among the leaders down the Flemington straight, all the time keeping Dubious to her inside to her sights.

She extended the reins at the 250m and Dalasan ($2.60 favourite) was strong over the last fifty meters and went on to beat Dubious ($9.50) by three quarters of a length with Express Pass ($6) the same distance away in third place.

Dalasan will now return to his Morphettville base in Adelaide to prepare for the Caulfield Guineas Prelude before returning to Melbourne.

“He will go back home,” Macdonald said.

Dalasan has firmed in the Caulfield Guineas from $7 to $5 at Ladbrokes.com.au.