Written By is undefeated from two race starts and Beeg said that the colt has come through his impressive win in the Group 3 $200,000 Ladbrokes Blue Diamond Prelude (1100m) at Caulfield two weeks ago in great shape. 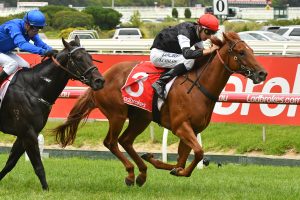 Written By is a leading contender in the 2018 Ladbrokes Blue Diamond Stakes. Photo by: Ultimate Racing Photos

Regular rider Jordan Childs has the job of navigating the best run possible from a wide barrier after Written By drew eighteen in the original barrier draw but could jump from fourteen in the final field of sixteen if all four emergencies fail to gain a start.

Begg is not overly concerned with an outside gate and said that Written By will appreciate the extra galloping room.

“He has proven both times he’s won that he likes a bit of galloping room,” Begg told AAP.

“It depends on how hard a run he gets. If he can get some cover then he can blend into the race when he wants to.”

Begg gave the all clear for Written By to take his place in the Ladbrokes Blue Diamond Stakes several days after his win in the Blue Diamond Prelude for the colt and geldings once he saw that the Written Tycoon colt had come through the run unblemished.

“He was always going to run if he had a good week after the Prelude,” Begg said.

“The horse is very resilient. He had a hard run and he had a hard trial too which makes it like two runs in a week.”

“He hasn’t left an oat since he raced and he’s certainly gone ahead.”

The wide barrier has put punters off and Written By has drifted slightly in the betting for the Ladbrokes Blue Diamond Stakes from $9.50 to $10 at Ladbrokes.com.au.

In a wide open betting race, the Lindsay Park trained Long Leaf sits at the top of the market order at $6.50 just ahead of Tony McEvoy’s filly Oohood at $7.50, the favourite’s stablemate Ennis Hill and the James Cummings trained Plague Stone at $8 and Craig Williams’ mount Kinky Boom at $9.

The post Blue Diamond Stakes 2018: Written By Ready To Tough Out appeared first on HorseRacing.com.au.