Trainer James Cummings has put the blinkers back on Exhilarates in a bid top boost her chances in the Group 3 $125,000 Brandon’s Gold Coast Guineas (1200m) at the Gold Coast on Saturday. 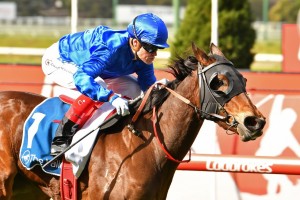 Exhilarates, above, will wear the blinkers in the 2020 Gold Coast Guineas at the Gold Coast. Photo by Ultimate Racing Photos.

Exhilarates wore the blinkers when she won the 2019 $2m Magic Millions 2yo Classic (1200m) at the Gold Coast and the Snitzel filly will wear them again when she returns to the scene of her biggest win.

Exhilarates returns to the Gold Coast for the third time after running third to Alligator Blood in the $2m Magic Millions 3yo Guineas in January and Cummings expects a forward with two recent barrier trials under her belt.

“She returns to the scene of her biggest win on a track where she’s won two races, which all has to count for something,” Cummings told racing.com.

“Her summer campaign was nice and brief after a spring in which she excelled.

“Both her runs were good last time in and there was certainly nothing negative to take away from finishing third here in the Guineas in January.

“She’s had two nice trials to have her ready for a highly anticipated Brisbane Carnival campaign.”

Exhilarates was out of luck at the barrier draw for the Gold Coast Guineas, coming up with gate fifteen in the original draw and the filly will be ridden by top local jockey Robbie Fradd.

Cummings only gave Exhilarates a short campaign over the Summer months which included a fifth in the Listed $150,000 Gosford Guineas (1200m) at Gosford  on December 27 followed by her third in the Magic Millions 3yo Guineas.

Pre-post betting at Ladbrokes.com.au for the Gold Coast Guineas has seen Exhilarates firm in from $7 to $6 while Toowoomba three year old Command ‘N’ Conquer remains the favourite at $3.90.

Command ‘N’ Conquer was the winner of his first three race starts with a debut win on his home track at Toowoomba followed by back to back wins at Doomben before suffering his first defeat last start when second to Archer’s Paradox in a 900m BenchMark 78 Handicap at The Gold Coast.

The Steve Tregea trained gelding will move into barrier nine with the early scratching of Niedorp who drew inside of him and will be ridden by his regular jock James Orman.