The James Cummings trained Bivouac enhanced his chances for the Group 1 Golden Rose for the three year olds in a fortnight with a scintillating win in the Group 2 $200,000 Sydney Markets Run To The Rose (1200m) at Rosehill today. 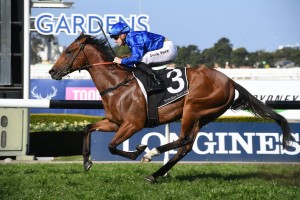 Bivouac, above, takes out the Run To The Rose at Rosehill. Photo by Steve Hart.

Bivouac is now the $3.80 favourite for the Group 1 $1m Golden Rose Stakes (1400m) at Rosehill  while the disappointment of the Run To The Rose, the $2.40 favourite Exceedance, is now on the second line of betting at $4.

Bivouac was comprehensively beaten by Exceedance when they last meet in the Group 3 $160,000 San Domenico Stakes (1100m) at Rosehill two weeks ago but the Cummings trained Exceed And Excel colt was able turn the tables today.

The Team Hawkes trained Exceedance never threatened in the straight and wound up in third spot behind Bivouac ($4) and Yes Yes Yes ($7) from the Chris Waller stable.

Josh Parr has Bivouac quickly into stride from a wide gate in the eight horse field and was able to sit behind the leader Hightail until heads were turned for home.

Parr released the brakes half way was down the straight and the Run To The Rose was run and won at that point.

Cummings took the blinkers off Bivouac today and the colt responded by settling better in the run and stable representation Darren Beadman said that was the difference today.

“It was a masterstroke for James by taking the blinkers off him. He probably did need those blinkers early days but he’s a lot more switched on and he’s knows he’s a colt now,” Beadman said.

“Something as simple as last start when he just had to improve half a length, instead of taking an inch he took a mile which brought him undone on a heavy track. He was just too aggressive.”

“Today drawing that gate he was able to just roll over and slot into a nice position. I think getting into a nice consistency in his rhythm and his gallop and his breathing. He looked a very happy horse and it was just a matter of going through his gears.”

“He’s won on soft ground before because of his ability and he’s such a trier, but today he really won with superiority.”

The post Bivouac enhanced his Golden Rose chances with scintillating win in the Run To The Rose appeared first on HorseRacing.com.au.