The Lindsay Park team will be hoping to make history on Tuesday at Flemington as they line up three hopefuls in the $7 million Lexus Melbourne Cup (3200m).

The four-year-old Irish raider has been installed as the only other single-digit chance in the race alongside Caulfield Cup winner and favourite Mer De Glace.

Constantinople struggled for luck last time out at Caulfield but drew trumps with a gate Makybe Diva last won from in 2004. Trainer Ben Hayes was on hand at Flemington on Saturday and began by saying how pleased he was with the barrier result. 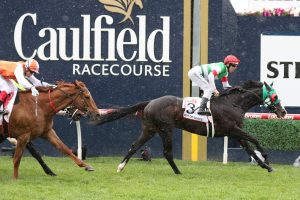 “Very happy, wanted a gate between five and 10 and we got the middle seven. Should get a good run from that gate, we settle in a lovely position, we just need luck at the top of the straight.

He’s had a couple looks at the course proper now. I think Luke Nolen’s first words when he got off the horse were that he’ll enjoy the bigger track at Flemington, and I agree. He’s a big horse, and the big long straight will suit him” Hayes told Sky Racing.

The Galileo colt capped off his two-year-old season with a stunning ten length win at Thurles last October in his third-start maiden over 1609m. The Irishman returned as a three-year-old the following April and showed plenty of character running second at Cork in a step up beyond the mile.

With things trending up, all of that was followed by a win in the Gallinule Stakes (2012m) at The Curragh in May. Famous Gallinule winners include Adelaide in 2014, who went on to win the Cox Plate the very same year.

Unfortunately, Constantinople was a good thing beat in his next start as he ran second at Ascot in June. That result kick-started a string of not-so convincing seconds as a sudden tendency to sweat up prior to the race resulted in some slow jump-outs from the barriers.

“He’s only had nine starts and he’s won two, so he’s got a thirty per cent win rate. So, it’s hard to say he doesn’t want to win,” Hayes went on to say.

Constantinople has typically enjoyed close to a month off between runs, which makes Tuesday’s start even more intriguing after a two-week break following the Caulfield Cup.

Now a four-year-old, Hayes is hoping the horse’s immaturity is a thing of the past.

“I reckon a lot of improvement. He was very unlucky in the race as everyone knows,” Hayes said referring to the Caulfield Cup.

“He’s really bounced out of it, he didn’t have a hard run and I’ve been thrilled with his work. I just think his natural improvement a couple weeks between runs, and he’ll fly.”

The pressure is as much on the horse as it is the trainers on Tuesday. Having failed to win a race since May, the hype around Constantinople could fizzle out if he fails to find any luck down the straight.

Fortunately for the Lindsay Park team, their Melbourne Cup hopes don’t end with the Irish international. Rostropovich, who ran fifth last year, drew gate 12 on Saturday and will be looking to make up for a disappointing start in the Caulfield Cup.

“You almost forget that run. He made a move and he did a lot of work and didn’t finish off the race.

He’s drawn a gate which is smack bang in the middle, he’ll get cover which is a much easier run. He came fifth in the race last year; we know he runs out 3200m and we’ve been really happy with him at home. So, expect a big improvement” Hayes said of the five-year-old.

Rostropovich is a long $61.00 chance in Ladbrokes’ market, followed by stablemate Neufbosc ($151), who came up short with barrier 23.

“He’s snuck in and he’s drawn an awkward gate which doesn’t make it easy. I’ll have to have a chat with Dad and Tom and our jockey, because I’m not sure what we do from that gate” Hayes said when asked on the plan for the French import.

Winning a Melbourne Cup is at the top of Ben’s bucket list after his dad David accomplished the feat in 1994 with British import Jeune.

“There’s always pressure to win the Melbourne Cup, it’s the biggest race in Australia. It’s a dream of mine to win it and I’m sure Tom would love to win it. Dad’s won it as well, but to win it as a three-way partnership would just be fantastic” Hayes said.