Team Snowden’s debut winner Bartley needs another win to secure a spot in the final field of sixteen for the 2020 $2m The Star Gold Coast Magic Millions 2yo Classic (1200m) at the Gold Coast on January 11. 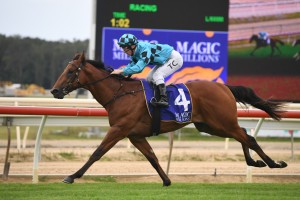 Farnan, above, is the early favourite for the 2020 Magic Millions 2yo Classic at the Gold Coast. Photo by Steve Hart.

Bartley is number twenty-seven in the order of entry for the Magic Millions 2yo Classic after collecting $16,740 for his win in a two year old Maiden over 1000m at Kembla Grange last Saturday.

The Peter and Paul Snowden trained Bartley still has to improve his racing manners but even though he was a little sloe to leave the barriers and then raced a little bit greenly in the straight, the Written Tycoon colt was able to gap his rivals to record a three and a quarter lengths win.

“It was surprising to see him do so much wrong because I thought he was a bit more advanced than that but the flip side to that is he’s even better than what he showed on Saturday,” Paul Snowden told Racenet.

“Now it’s one more race and that will determine whether he heads to the Gold Coast or not. If he wins, he’ll be there.

“He’s always been one of our main colts.”

Bartley is marked at $26 at Ladbrokes.com.au for the 2020 Magic Millions 2yo Classic while the Gai Waterhouse and Adrian Bott trained Farnan heads the betting at $5.50.

Trainer Mark Newnham’s smart filly Every Rose is the second pick at $6 just ahead of Bartley’s stablemate Stellar Pauline at $8.

The post Bartley needs one more win to make the 2020 Magic Millions 2yo Classic field appeared first on HorseRacing.com.au.