Today’s impressive Sandown winner Aysar has penciled in a 2020 Spring Carnival campaign after trouncing his rivals with a three lengths win in the Ladbrokes Back Yourself Handicap (1300m) for the two year olds. 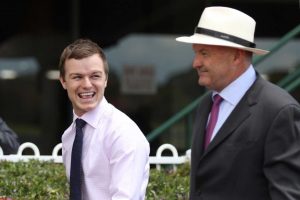 The Lindsay Park co-trainer Ben Hayes, in pink shirt, is keen on the prospects of Aysar. Photo By: Ultimate Racing Photos

Lindsay Park co-trainer Ben Hayes was quick to confirm that Aysar would have a short break before being prepared for the three year old races in the upcoming Spring Carnival.

“A two-year-old like him we normally wouldn’t have him running this deep into winter. But we wanted to win as a two-year-old,” Ben Hayes said.

“We have ticked that off, so I say you won’t see him to a three-year-old in the new season.

“We will just cuddle him at home, tick him over and he will be a fit horse on the scene early in the season.”

“I’m relieved. I always get a bit nervous when I really like a horse and they haven’t done it yet and I just want to see them do it.”

“He lived up to my expectations. He’s an exciting horse going forward.

“I just think he’s a lovely, lengthy horse and I just think once we get him out to a trip you will see the best of him.

“1400m, a mile, he will be really good. He’s got good tactical speed and I think he’s an exciting horse.”

Winning jockey Luke Nolen was aboard Aysar for his debut third in a 1000m Mornington two year old Handicap on June 8 and stuck with the Deep Field colt today.

Nolen positioned Aysra juts behind the leaders before moving out into clear space approaching the home turn.

Aysar was travelling smoothly when heads were turned for home and once Nolen released the brakes, the $2.30 favourite careered away to record a very soft win.

“It was a great ride by Luke, it was never in doubt,” said Ben Hayes, who shares the Lindsay Park training operation with his father David Hayes and cousin  Tom Dabernig.

“He really learnt a lot from his first-up run. He was very professional today and he really hit the line.”