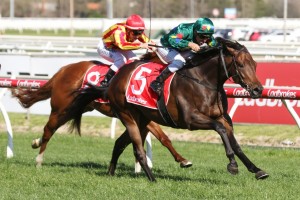 Alligator Blood, above, could clash again with Super Seth during the 2020 Melbourne Autumn Carnival. Photo by Ultimate Racing Photos.

Alligator Blood had to overcome a drama filled lead up to his win in the $2m Gold Coast Magic Millions 3yo Guineas (1400m) at the Gold Coast last Saturday to take his winning record to eight from nine starts.

The David Vandyke trained rising star’s only defeat was a heartbreaking nose second to Super Seth in the Group 1 $2m Ladbrokes Caulfield Guineas (1600m) at Caulfield during the 2019 Melbourne Spring Carnival.

Alligator Blood has been installed as the $4.20 favourite for the Australian Guineas at Ladbrokes.com.au but Vandyke is yet to confirm a Melbourne Autumn Carnival campaign for Queensland’s new glamour galloper.

“I’ll make a decision next week about our next move. Whether he‘s going to head towards Melbourne or whether he goes for an extended break,” Vandyke told Sky Sports Radio.

“But he is a gelding and he could be around for years to come.

“So whether we go to Melbourne or not, I’ve had people say he could be an Everest horse or a Golden Eagle horse.

“There are a lot of races for him.”

The Anthony Freedman trained Super Seth is well into his preparation for the Australian Guineas and had an easy jump out at Flemington last Friday to finish third and assistant trained Sam Freedman said that the stable was happy with the way the Dundeel colt is shaping up for the Autumn.

“He was only just going for his first soft hit-out,” assistant Sam Freedman told AAP.

“We got him off the farm (Pinecliff) and took him up to Flemington and he jumped out really well.

“He tracked up behind them and Mark Zahra rode him and was really happy with his action.

“He had a nice blow afterwards so he’ll have another trial and then we’ll look to get him back to the races in the next three weeks.”

“He’s settling a lot better in his work and seems to be relaxing really nicely which is a good sign for him,” he said.

“He was a bit fierce and hadn’t quite put it all together last preparation until his grand final.”

Alligator Blood is also among the nominations for the All-Star Mile and shares favouritism at $8 with the Kiwi multiple Group 1 winning mare Melody Belle.