Sydney’s champion trainer Chris Waller is yet to map out a 2020 Autumn Carnival campaign for his Epsom and Golden Eagle winner Kolding. 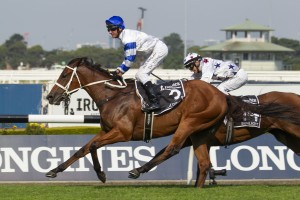 Kolding, above, could head to Melbourne for the All-Star Mile at Caulfield. Photo by Steve Hart.

Or the talented four year old could stay in Sydney for an Autumn Carnival campaign that would include the Group 1 $600,000 Chipping Norton Stakes (1600m) at Randwick on February 29 and Group 1 $1m The Agency George Ryder Stakes (1500m) at Rosehill three weeks later.

“Kolding is an interesting horse as he just keeps getting better,” Waller told AAP.

“I’ve got a slight leaning to the All-Star Mile but how do you set a horse for the race if you don’t know he will get a start?

“So, unless I have a good indication he is going to get a start in the race we can stay home and target the Apollo Stakes, Chipping Norton Stakes and George Ryder Stakes, which I don’t mind.

“If he was to go to the got to All Star Mile, I would run him in the Orr Stakes as the All Star Mile is at Caulfield this year.”

Kolding was in the public eye again this morning when sixth in a 900m barrier trial at Rosehill with James McDonald in the saddle.

“He has come back in really good order. He looks sensational and trialled accordingly,’ McDonald told Richard Callander on twitter.

“He jumped well and put himself in a handy position and most importantly felt terrific. He is going well.”

Kolding’s outstanding Sydney Spring Carnival form has seen him installed as the equal second favourite at Ladbrokes.com.au for the All-Star Mile at $9 with last year’s winner Mystic Journey while Magic Millions 3yo Guineas winner Alligator Blood and Kiwi super star Melody Belle share the top spot in the betting at $8.

Sunshine Coast trainer David Vandyke is yet to confirm an All-Star Mile campaign for Alligator Blood who could be sent to the paddock for a well deserved break after scoring a dominant win in the $2m Gold Coast Magic Millions 3yo Guineas (1400m) at the Gold Coast last Saturday.

Golden Slipper Autumn Target for Away Game
Scroll to top