A win by Affair To Remember in Saturday’s Group 2 $250,000 Sandown Guineas (1600m) at Sandown will be some consolation for an aborted Kennedy Oaks campaign. 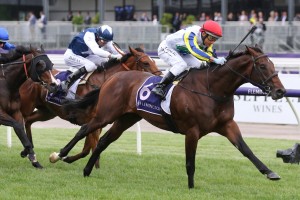 Banquo, above, is among the nominations for the 2019 Sandown Guineas at Sandown, Photo by Ultimate Racing Photos.

Affair To Remember was heading for a start in the Group 1 $1m Kennedy Oaks (2500m) at Flemington on day three of the 2019 Melbourne Cup Carnival but trainer Dan O’Sullivan had to throw those plans out of the window when the filly was unable to take her place in an important lead up race in the Group 2 $300,000 Edward Manifold Stakes (1600m) at Flemington on October 5.

Affair To Remember is one of two fillies among the twelve nominations for the Sandown Guineas along with the Tony and Calvin McEvoy trained filly Pretty Brazen.

The Toranado filly was able to break through for her maiden win at her second race start over 1300m at Geelong on September 1 but was then beaten into seventh place in Listed $140,000 Jim Moloney Stakes (1400m) at Caulfield on September 21.

O’Sullivan then took Affair To Remember to Flemington where she made up plenty of ground from the back to finish a luckless third in a Fillies and Mares BenchMark 70 Handicap over 1700m which put her on track for the Sandown Guineas.

“She had some luck in her maiden so that was good, but she had no luck at Caulfield and she didn’t get the best of luck at Flemington either,” O’Sullivan said.

“But in saying that, she was having her fourth start in a race against some four-year-old mares.

“When she went to shoulder out, they just said, ‘no back in there you go’.

“She got pushed back in but when she got out, she got home very hard.

“We had to go back a fair bit from our barrier at Flemington too, which made it a bit harder.”

“She’s learning all the time and she’ll run well on Saturday.”

O’Sullivan will send Affair To Remember to paddock after the Sandown Guineas before preparing her for the Group 1 $500,000 Australasian Oaks (2000m) at Morphettville during the 2020 Adelaide Autumn Carnival.

Affair To Remember has been installed as the early $3.80 favourite for the Sandown Guineas at Ladbrokes.com.au ahead of Danny O’Brien trained Banquo at $4.60 and the Ciaron Maher and David Eustace trained Heart Of Puissance at $5.

The post Affair To Remember to chase consolation win in 2019 Sandown Guineas appeared first on HorseRacing.com.au.