Racing Victoria have announced that the prizemoney for the 2020 Melbourne Cup will remain at $8 million. 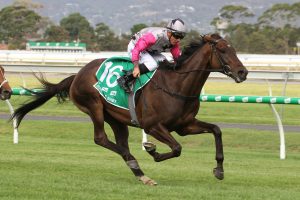 Surprise Baby, above, is one of the early favourites for the 2020 Melbourne Cup at Flemington. Photo by Jenny Barnes

The Group 1 Lexus Melbourne Cup run over 3200m at Flemington on the first Tuesday in November was in danger of being moved as well as having its prizemoney reduced because of the impact of the coronavirus crisis but Australia’s most famous race will maintain its place in its traditional spot.

The Group 1 Caulfield Cup and the Group 1 Ladbrokes Cox Plate (2040m) have also retained the same level of prizemoney as previous years with the 2400m staying test at Caulfield on October 17 to remain at $5 million and the weight for age championship at The Valley on October 24 will also carry a purse of $5 million.

“The decision has been made to retain current prizemoney for more than 100 Group and Listed races programmed throughout the 2020 Spring Racing Carnival including our marquee races in the Lexus Melbourne Cup, Caulfield Cup and Ladbrokes Cox Plate.

“In terms of the Spring Racing Carnival, we have reviewed our prizemoney contributions and the historical top-ups from Clubs on their feature races to determine what is appropriate in an environment where such great uncertainty remains here in Victoria.

“The COVID-19 pandemic has had a profound impact across the Victorian racing industry even though we have been able to safely continue racing thanks to the incredible work of so many.

“It is this prudent approach in such uncertain times, together with better than expected returns from wagering, that means we will be in a position to restore minimum prizemoney levels from 1 August 2020.

“As the only live sport for three months, wagering turnover on Victorian racing has increased during the pandemic and this has largely helped to offset a significant reduction in returns from the VicTAB Joint Venture. Despite the improved wagering outcomes, we will still be calling on the Industry Sustainability Fund to underwrite the return of prizemoney to pre-COVID levels.”

Below is a list of the major 2020 Melbourne Spring Carnival Feature races with their prizemoney levels remaining the same as 2019.

The post 2020 Melbourne Cup prizemoney to stay at $8 million appeared first on HorseRacing.com.au.