Former Irish hurdler True Self is likely to return to Australia for the 2020 Melbourne Cup after producing a strong staying performance to win the Group 3 $300,000 Queen Elizabeth Stakes (2600m) at Flemington today. 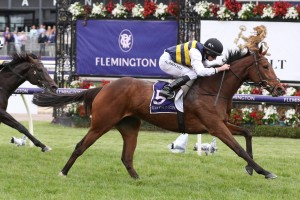 True Self, above, wins the 2019 Queen Elizabeth Stakes at Flemington. Photo by Ultimate Racing Photos.

“There is a good chance that she might be back here in twelve months time and running on the Tuesday instead of the Saturday.”

“I think so. Some of her jumping form, she stays very well.”

“We are surprised at how speed she has shown on the flat.”

“We will have to congratulate David Casey, he has been minding her here for the last five, maybe six weeks, and his reports on the telephone about how well she has been going have been correct.”

Champion English jockey Ryan Moore settled True Self in the middle of the pack in the early and middle stages and was then held up badly for a run on the home turn with horses all around him.

Moore held his nerve and after missing a run to his outside at the 300m, went searching back towards the inside until he found a gap.

Moore had little space to work in but True Self responded when he pushed her through a tiny opening and the $2.10 favourite burst through at the 200m to go on and record a one and half lengths win in the Queen Elizabeth Stakes.

The Peter and Paul Snowden trained Carif ($6) continued his good staying performances and ran on for second with Maurus ($21) claiming third spot.

True Self’s connections picked up a $200,000 bonus for winning the Queen Elizabeth Stake after missing out on a place in the Melbourne Cup after being a final acceptor for the famous two miler.