It is a capacity field gathered for the $2M The Star Gold Coast Magic Millions 2YO Classic (1200m) in Queensland on Saturday including a four-pronged attack by Team Snowden. 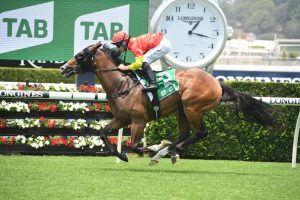 Aim has shot to the top of 2020 Magic Millions 2YO Classic betting after an ideal barrier two draw. Photo: Steve Hart.

Former head trainer for the Darley Australia (now Godolphin) operation, Peter Snowden and his son Paul chase a second Magic Millions 2YO Classic win at the Gold Coast after taking out the set weights feature in 2016 with the odds-on favourite, subsequent Golden Slipper winner Capitalist.

The Snowdens look to have a strong chance on the weekend with their contingent led by undefeated Star Witness colt Aim who came up trumps with gate two at Tuesday’s Magic Millions Classic barrier draw.

Aim chases a third career win for the operation after his back-to-back Sydney victories, the latest of which saw him take out a 2YO Handicap by four lengths at Randwick on December 21.

He has subsequently shot to the top of the Magic Millions 2YO Classic betting markets paying $6 in an open affair at Ladbrokes.com.au.

Progressive Redoute’s Choice colt King’s Legacy on the quick back-up out of his half-length win in the Group 3 B.J. McLachlan Plate (1200m) at Eagle Farm on December 28 is not far behind for the Snowdens at $7 after drawing barrier eight.

The son of Deep Field improved on his eighth in the Group 3 Breeders Plate (1000m) on debut last October to win at Canberra and Randwick respectively on 1000m in December and is a $21 chance for the big one having drawn out in gate 11.

Maiden Stella Pauline at $17 following a wide barrier 13 draw is the final Snowden runner in the $2 million showdown, the Not A Single Doubt filly having placed second in both her career starts.

The first was behind Every Rose in last October’s Group 3 Gimcrack Stakes (1000m) before a first-up second behind her stablemate Aim at Randwick on December 21.

The Mark Newnham-trained Choisir filly Every Rose meanwhile has franked the Gimcrack Stakes form this campaign with back-to-back seconds in the Magic Millions Wyong 2YO Classic and BJ McLachlan.

She gets a chance to return to winning form in the Magic Millions 2YO Classic on Saturday with Josh Parr to ride from gate nine and is the shortest-priced filly in the markets at $9.

Last year’s winning trainer for Godolphin with Exhilarates (2019), James Cummings saddles-up Conceited in the 2020 Magic Millions Classic field with the galloper suffering a blow with barrier 17.

Damian Lane continues his association with the striking son of Brazen Beau who won on debut down the straight at Flemington on December 14 before a January 4 second at the Gold Coast track over 1100m in the Gold Nugget.

Conceited is currently the $9 equal third-elect in the Magic Millions 2YO Classic odds and will only come in three barriers (14) should all the emergencies fail to gain a run.

Farnan at $7 in barrier five represents Gai Waterhouse & Adrian Bott in the Restricted Listed event, the Not A Single Doubt colt having won his two lead-up runs including the victory over Every Rose in the Wyong Magic Millions Classic.

Three years ago Toby Edmonds won the Magic Millions 2YO Classic with his star local filly Houtzen (2018) from the outside barrier, and this year the Gold Coast trainer returns with three final acceptances in partnership with his son Trent.

The Edmonds’ best shot at their home town feature is Headwater colt Wisdom Of Water in a midfield barrier seven draw coming off the Gold Nugget win over Conceited last weekend.

Smart Missile filly Smart ‘N’ Sexy (barrier 20 into 15) is their other confirmed runner, the improver having run second to Away Game in the Listed Calaway Gal Stakes (1100m) at Doomben on debut before her second to Queen Kay in last Saturday’s Gold Pearl (1100m) at the Gold Coast.

The Drinks Cart (16) meanwhile is the third emergency unlikely to gain a run for Team Edmonds.