Well backed Scales of Justice is now a two-time Group 1 winner after claiming the 2019 Memsie Stakes (1400m) at Caulfield on Saturday.

Punters came in droves for the old colt by Not A Single Doubt, backing him from $4.00 earlier in the week into the $3.70 second-elect behind Alizee.

After a disastrous ride in the Group 3 Spring Steaks at Morphettville a fortnight ago, jockey Dean Yendell made up for his wrongdoings from a handy three-wide spot down the straight at Caulfield. 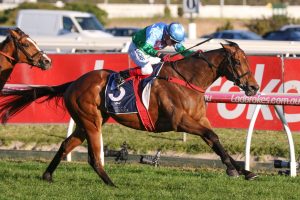 “It’s great to win for the owners, I didn’t give this horse anything he didn’t already have. Good horse, well owned” Smith joked after the race.

“Lovely horse to ride, just does everything in his stride” Yendell said.

“He just had a superior run through the race, they went on a good solid tempo. Sort of produced him early and let him rip, and he just took off from me and I was thinking I hope these buggers don’t get me on the 100, they were sort of closing in.

But he fought them off really easily so onwards and upwards. Spring Carnival, I don’t know what’s in store for him next. Obviously, he’s proven over a bit of a trip so maybe a Cox Plate come late October.”

Scales of Justice has already firmed in the Ladbrokes Cox Plate market, moving from $51.00 into $31.00.

Seven winners of the Memsie Stakes have gone on to win the Cox Plate, with the most recent being So You Think in 2010.